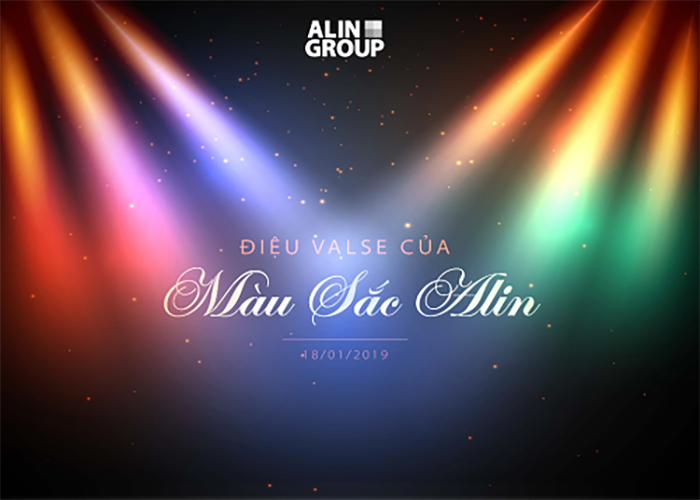 THE VALSE OF ALIN'S COLORS

Starting for "The Valse of Alin's colors"

The spiral is one of the oldest natural geometries found in seashells, snails, ferns, or in natural phenomena such as vortexes and rotating galaxies. The spiral in many cultures has become a powerful symbol of creativity and growth.

This is also the main source to form the idea of a spiral of colors intertwined and spread on the actual creation, the symbol of an AlinGroup that creates and thrives on the foundation that as Phil Jackson said: “The strength of a group is an independent individual. The strength of each individual is a group. ”

The idea of the Gala night called "The Valse of Alin colors" was also formed. The spiral is inspired and visualized by a circular dance - the Valse dance. Alin color not only is painted by the distinctive color of the member companies, but it also represents the colors of the events of the past year at AlinGroup. The red of Noel, the orange and black color of the Halloween party, the green grass of the family festival in Binh Quoi, the color of the recycled items prepared for the green schoolyard. Then the blue color of the beach trip in Phu Quoc as well as last year's Gala night together, witnessing the shining colors of Alin's talents in the program "Shine with Alin". Those indelible colors are imprinted and left with the Golden Moment photo contest.

Memories after "The Valse of Alin's colors"

The melody from mellow to strong in the song "Colors of Alin" composed by the couple of Ms. Ngoc Lan and Mr. The Anh - musician "Tran Tien" of AlinGroup were like the opening drum for the colorful Gala. The Alin Five Colors Team, associated with the image of five pick-husband princesses, brought many surprises to viewers and was also the team that received the most votes from AlinGroup members. The Valse is extended again by the story of "Color of Salary" of the Color of Love Team, and then filled the audience with laughter by the talented performance of the AHYVO team, the team with the blue color of hope. The calm atmosphere with the song "Go home" presented by two inspirational voices of the team "Memory color" is a guide to a story containing many emotions. The competition ended with a performance sending the message of team cohesion with the color "Solidarity."

Hope all members of Alin's family will keep beautiful memories together.